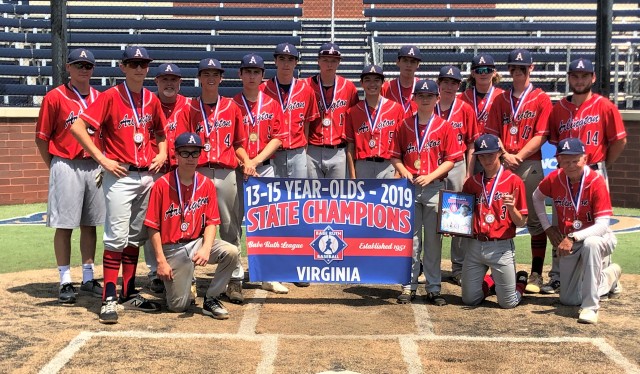 The 15 YO All-Stars were undefeated in their march through the state tournament. They beat South Hill in the final round 9-6 and will advance to the Southeast Regional Tournament next week.

16-18 YO All-Stars finished third in the state tournament, but also received a bit to the regional games.

Arlington 14s All-Stars emerged victorious in a battle against Southwestern Youth in their 14YO State Tournament game in Herndon this morning. Final score: 4-1 after 10 innings! They have won all three games in their tournament.

The 13YO All-Stars team lost the championship game today to Glen Allen, the only team to beat the ASBR team throughout the tournament. Their tournament record was 3-2.

Unfortunately, the 14s Tournament Team lost to Gloucester earlier today, eliminating their run toward the championship with a 2-2 record.

Arlington 15s won game #2 by mercy rule, 11-1 against Augusta in their march through the 13-15 YO Virginia State Championship, hosted by Arlington at Barcroft Park. They will play their third game this afternoon.